The default hardware kit for most podcasters and live streamers consists of two widely known products: A Logitech webcam and a Blue Yeti microphone. The Yeti has become one of the most popular all-around mics on the market because it delivers high quality, versatility, and a distinctive look without breaking the bank. Blue is now launching a new member in the lineup called the Yeti X, taking everything from the original, but adding great lighting and powerful audio processing capabilities that will appeal to podcasters and a rapidly growing market of game streamers.

Design, hardware, what’s in the box

At first glance, the Yeti X looks like a hybrid between the original Yeti and last year’s Yeti Nano. It has the familiar aluminum body, clicky buttons, and a stand that’s heavy enough to stand up in a hurricane — which I love.

The grill has morphed into an oval shape and there’s a single LED-lit knob on the front for control. The bottom-mounted headphone jack and USB port (now microUSB) have traded sides, and a single button on the rear cycles through pickup patterns: Cardioid, Omni, Bi-Directional, and Stereo.

In addition to the microphone and stand, the box also contains one USB A-to-microUSB cable measuring about 6.5 feet (2 meters) in length. The mic can be removed from its stand and mounted on a Blue Compass boom arm or Radius III shockmount.

The Yeti X is not replacing the original Yeti or any other existing Blue microphone. It will join the lineup as the new top-tier model at $170 while the others remain at their current prices. 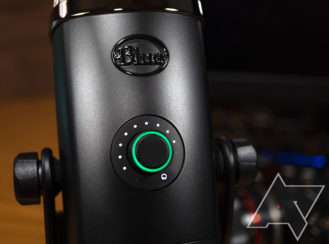 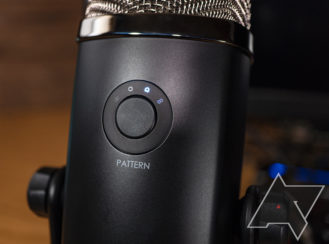 The multi-function knob on the front is used to control basically everything. Press it like a button to mute or unmute the recording, or long-press to cycle through modes: Gain (mic sensitivity), Volume (for headphones), and Blending (balance between mic feedback and computer audio).

Like many of Logitech’s newer (gamer-oriented) hardware, there are a lot of multicolor LEDs that show modes and settings for the mic. They’re extensively configurable using Logitech’s G HUB software, so you can change the colors for virtually every condition. This customizability may not be necessary, but it’s a nice touch. And for any streamer or YouTuber that uses specific branding colors or aesthetic elements, this is another surface that can be tailored to match their style.

The LEDs also have a functional side. While in the right mode, they behave as an audio meter. This makes it easy to spot if you’re clipping or picking up a lot of background sound.

Unfortunately, there is oneglaringoversight: Brightness… You can’t control it. It’s a classic problem in almost every living room media center, but unlike your old DVD player, you can’t hide this mic in a cabinet most of the time. As I write this review at 11:22pm, sitting in an almost entirely dark office, these little LEDs are searing into my retinas. They cast very little ambient glow, but they’re still strangely harsh. You know what… I just hung a hat over the mic. Problem solved until I need to use it again. 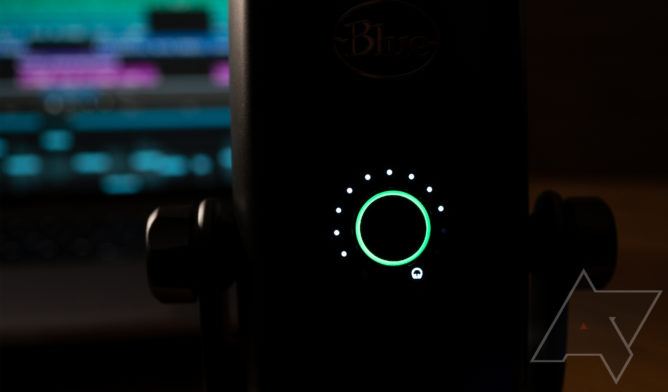 The other major highlight to the Yeti X is Blue VO!CE, another feature configured through G HUB that enables several audio processing effects. Let’s be clear, these aren’t weird, candy-coated filters that sound like you’re underwater or filled with helium. Maybe you can do that if you really want, but these are legitimate tools that can tune audio input for better sound. Blue VO!CE includes: 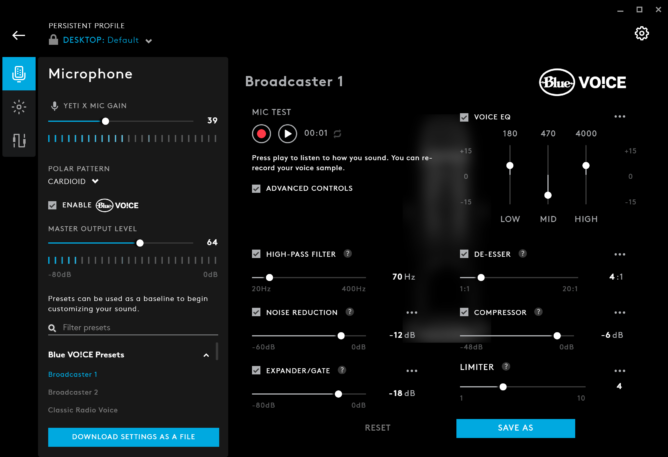 If you have ever done any work with audio beyond simple recording and sequencing, most of those should be familiar. You won’t have all the power of serious audio suites like Ableton Live or Logic Pro X, but the processors are configurable and should be plenty for any live streamer and most podcasters.

You can create and save your own presets, but there are also several included by Blue to help you get started. A sharing service is also available where other people have uploaded their own presets. You can test your settings by recording a clip and switching between different presets or adjusting settings live. This helps for making fine adjustments, but remember that a recording made on one preset may sound bad if it’s played back with a very different preset.

Some of Blue’s improvements to the Yeti X aren’t necessarily headliners, but still worth mentioning. To begin with, a fourth condenser was added for better performance in some pickup patterns. There’s not much discernable difference without an original Yeti to compare to, but it does help to filter out some background noises.

The audio system was also upgraded from 16-bit to 24-bit in the Yeti X. Bit depth in audio is just like color depth in images, it gives more precision to the recording. In truth, a 16-bit microphone like the Yeti is fine for most livestreamers or podcasters; however, if you’re recording music, voiceovers, or sound effects, 24-bit can make a big difference in post processing.

I’m disappointed Blue stuck with microUSB. The Yeti Nano was the first in the family to ditch miniUSB when it launched last year, which is great, but even then it was criticized for only going to microUSB instead of jumping straight to Type-C. Look, there was (and is) too much enthusiasm to eradicate gadgets with older ports — especially smart home stuff — but I sometimes travel with my mic, and I hate to mess around with packing several different types of cables.

My other big complaint is with using buttons during live recordings. The actuation is chunky and makes noise that you’re going to hear in the audio. This is made worse now that the Yeti X also uses a long press for mode switching. You can do most things with software, so this can be worked around, but I would have liked a capacitive button that worked like push-to-talk in reverse, let’s say the Blue logo.

Should you buy it?

Yes. This is one of the best all-around USB microphones available for less than $200. Blue has done something pretty special with the Yeti X by making it easy to use out of the box, but also giving you some room to grow as your experience and knowledge of audio processing increases. This isn’t going to be the microphone of choice in a recording studio or radio station, but it’s a great fit for podcasters, live streamers, and just about anybody that needs a great recordings without becoming an audio engineer.

But what if you have the original Yeti, or maybe a Yeti Nano, should you upgrade? Probably not. The customizable lighting is cool, especially with metering, but it’s not necessary for good audio. The audio processors are the main feature, but if you’re recording and editing, you can already do more in post with software like Audacity or Logic. It’s more of a toss-up in live performances. Podcasters and gamers that want to fix sibilance and other annoying issues might find the upgrade worthwhile; but for those that reallyneedaudio processors and mixing capabilities, the Yeti X may not raise the ceiling enough if it’s ultimately time to step up to advanced equipment.

YouTube TV now available on PlayStation 4, only two years after the Xbox One – Android Police

Microsoft Edge is available for Windows 10 and MacOS. Here’s how to download it now – CNET

We asked, you answered: Rebecca Ford reviews your Warframe frames

ABOUT US
Techbits is your news, tech blog and article website. We provide you with the latest breaking news and videos straight from the tech industry.
Contact us: contact@techbits.us
© Techbits.us 2019
MORE STORIES
Available

Galaxy Fold now available in Canada for the low price of...