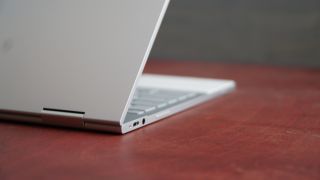 We’vepreviously heardthat Google would follow up itsPixelbook– the company’s flagshipChromebook– with a lighter and more affordable product than its premium predecessor, and now we’ve just gotten our best look at the Pixelbook Go yet.

Thanks to a trusted source close to9to5Google, the Pixelbook Go has been revealed in full, with extensive shots of the device itself in a salmon color scheme (visit the original article for a full gallery of images).

Ribbed for your pleasure

As pointed out by 9to5Google, the Pixelbook Go prominently sports a textured bottom panel, which features a colorful, ribbed panel coated in an apparently “grippy” material that “feels somewhat similar to a washboard or the roof of a dog’s mouth”.

The top half of the laptop, however, features a more traditionally smooth finish, although it’s also subtly tinged with a pink-ish hue.

As for ports, the left side of the Pixelbook Go is seen sporting a USB-C port, charging indicator LED, and a 3.5mm headphone jack, while the other side is home to a second USB-C connection.

With the unit opened, you’ll see more of that pink tinge on the Pixelbook Go’s notably MacBook-esque lower half, including the keyboard and trackpad, while the top half is home to a 13.3-inch display and rather prominent black bezel.

As far as specs are concerned, 9to5Google hasn’t found anything new to add sincethe last time it delved into the upcoming Chromebook’s internals.

This means that we can still likely expect a range of configurations that variably boast Intel Core m3, i5, or i7 processors, 8GB or 16GB of RAM, Full HD or 4K touch displays, and 64GB, 128GB, or 256GB of storage.

These options will all share two front-firing speakers, a 2MP front-facing camera (capable 1080p at 60fps), the Titan C chipset, the aforementioned two USB-C ports and headphone jack, and arrive in both “Just Black” and “Not Pink” configurations.

It’s worth noting that the unit that 9to5Google managed to get its hands on is a prototype – identifiable by the placeholder logo in the spot where we’d expect the Google ‘G’ – so any of the aforementioned details are technically subject to change, although we don’t expect they’ll do so considerably.

There’s no word currently on when the Pixelbook Go will be available and in which regions it will launch, but we’ll very likely hear more about it at the upcoming Google event on October 15, where the company is expected to launch itsPixel 4 and Pixel 4 XLhandsets.

MIT researchers are working on AI-based knitting design software that will...

bao - August 5, 2019
0
The growing popularity of 3D printing machines and companies like Thingiverse and Shapeways have given previously unimaginable powers to makers, enabling them to create everything from cosplay accessories to replacement parts. But even though 3D printing has created a new world of customized objects, most of us are still buying clothes off the rack. Now…

Many Samsung Galaxy Note 9 users are experiencing some horrible display...

Companies Use Borrowed Billions to Buy Back Stock, Not to Invest

The Black Widow trailer is here

Carcinogens Have Infiltrated the Generic Drug Supply in the U.S.

ABOUT US
Techbits is your news, tech blog and article website. We provide you with the latest breaking news and videos straight from the tech industry.
Contact us: [email protected]
© Techbits.us 2019
MORE STORIES
Canon