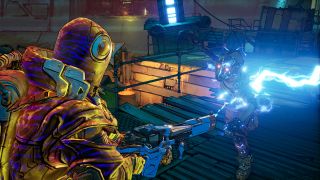 A big reason I’ve returned to theBorderlands seriesover the years is for its complete dismissal of game ‘balance.’ Creating broken vault hunter builds that destroy bosses with a couple clicksisthe endgame. These ridiculous synergies between skills and gear attributes feel like they got missed in development, but Gearbox doesn’t tend to care much about busted builds.

They’re part of Borderlands’ design—though the classic Borderlands 2Bee shield and Conference Call shotgun combodid get nerfed. Melting raid bosses, the kind of enemy meant to challenge a broken build, was a touch too far. Those campaign bosses are fair game though.

Borderlands 3 has yet to produce a similarly overpowered combination, but there are plenty of ridiculous vault hunter builds already out there. Here’s a few of the wildest so far.

Spoiler warning: all these builds were made with max level vault hunters and assume viewers have finished the campaign. Location and boss spoilers ahead.

Phaseslam and a little kiss. That’s all it takes forthis Amara buildfrom Reddit user DisperseRS  to end just about any enemy. Investing in skills that increase damage to enemies after using Phaseslam is the primary strategy, with points invested in gun damages bonuses also contributing. Their damage resistances go down and your DPS goes up. Shotguns are ideal for that up-front damage, and some roll with multipliers on the first shot, a great fit for this build. Reddit user slipperyekans helpfully put togethera character sheetfor reference if you’d like to try the build yourself.

I didn’t think FL4K’s cloaking action skill was all that, but I’m happy to have been proven wrong.YouTuber NickTew’s FL4K builduses Furious Attack to stack gun damage and handling for every shot. Guerillas in the Mist prevents the cloak from dissipating when FL4K attacks at the cost of some crit damage.

The key is pairing the build with a Jakob’s gun rolled with the attribute that returns ammo to the magazine with every critical shot. It keeps the Furious Attack damage bonus from decaying. Multiply that +150% cloaked crit damage by 10 stacks of Furious Attack that never decay because you never need to reload and FL4K becomes a demigod.

Reddit user Christianfd pulled offsomething equally powerful, and using only eight skill points to show how simple the core traits are. As my main, I almost never die as FL4K. Having a pet around and so many skills that stack damage and siphon health, with a few legendaries doing their thing, the bot’s busted in a good way.

This Moze buildfrom YouTuber Arekkz is less of a boss-deleter and more of a virtually invincible AoE monster. Splash damage, as we know, is the best damage in Borderlands 3, and this Moze is built around just that. Even better, this build is healed by explosive damage, which is also splash damage. Explosive damage hurts friend and foe alike from all sources. That means this Moze can walk right up to a bandit and pop a rocket in their face, healing for as much as the bandit hurts, the negative effects of explosive damage nullified.

This Zane build, also from YouTuber NickTew, is all about moving ridiculously fast to juice his already juiced DPS. It depends heavily on a few items, so it might take a bit more patience and luck to build than most. In the meantime, we can observe and golf clap.

It starts with 7 points into Violent Momentum, increasing gun damage while Zane moves and even more for the speed at which he moves. The rest of the points go into a spread of skills that buff Moze across the board when he kills an enemy, while Supersonic Man buffs his movement speed even more for each active action skill. Gotta go fast. Even faster with a legendary class mod that buffs his speed the lower his shield capacity. Throw on a zero capacity shield to move like starlight. It’s wild.

James is PC Gamer’s bad boy, staying up late to cover Fortnite while cooking up radical ideas for the weekly livestream. He can still kickflip and swears a lot. You’ll find him somewhere in the west growing mushrooms and playing Dark Souls.

‘Borderlands 3’ Is In A Moment Of Near-Perfection, No More Nerfs, Just A Couple More Buffs – Forbes

Apple And Google Say No To Location Tracking In Coronavirus Contact...

bao - May 5, 2020
0
Apple Inc. (NASDAQ: AAPL) and Alphabet Inc's (NASDAQ: GOOG)(NASDAQ: GOOGL) Google said they will not allow location tracking in a new contact tracing system they're developing jointly to tackle the coronavirus (COVID-19) pandemic, Reuters reported.What Happened"Apple and Google, whose operating systems power 99% of smart phones, said last month they would work together to create…

PS5 could crush Xbox Series X on sales, according to new...

How Extreme Heat Overwhelms Your Body and Becomes Deadly

‘Luigi’s Mansion 3’ is getting multiplayer DLC in 2020 – Engadget

ABOUT US
Techbits is your news, tech blog and article website. We provide you with the latest breaking news and videos straight from the tech industry.
Contact us: [email protected]
© Techbits.us 2019
MORE STORIES
Borderlands