We recently restored an Apollo Guidance Computer, the
revolutionary computer that helped navigate to the Moon and land on its surface.1
At a time when most computers filled rooms, the Apollo Guidance Computer (AGC) took up just a cubic foot.
This blog post discusses the small but complex switching power supplies that helped make the AGC compact
enough to fit onboard the spacecraft.

Inside the Apollo Guidance Computer. The power supplies are the tangles of wires on the far left.

The photo above shows the Apollo Guidance Computer after separating its two trays. Tray A on the left holds the logic and interface modules, while Tray B on the right has the memory circuitry.
The AGC has two power supplies in Tray A on the far left: a +4V power supply and a +14V power supply;
the power supplies look like a tangle of wires in the photo.
The logic circuitry, entirely built from NOR gates, was powered by 4 volts.
The interface circuitry and memory used the 14 volt supply. 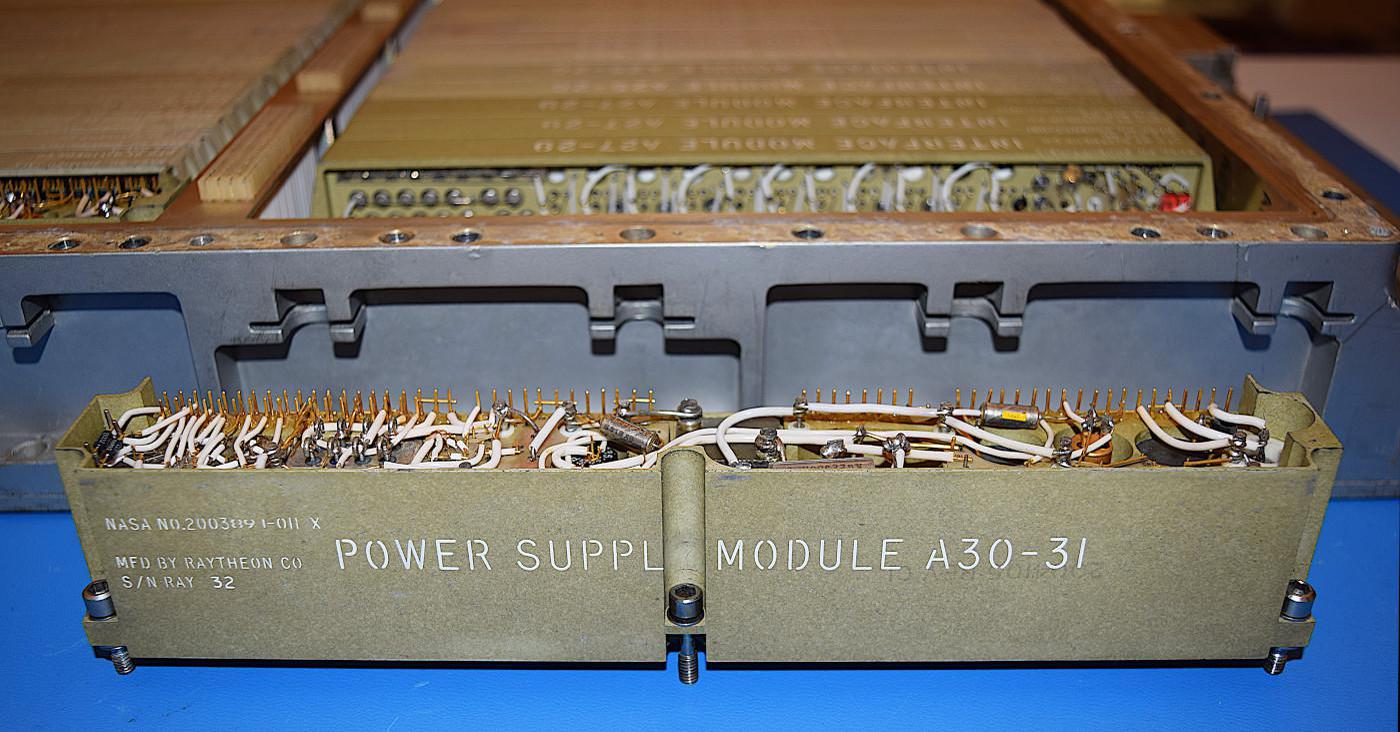 The power supplies, like the AGC’s other non-logic modules, were built with
cordwood construction.
In this high-density technique, cylindrical components were inserted into holes in the module, passing through
the module, with their leads exiting on either side.6
The left side of the photo below contains resistors, capacitors, and diodes. Because of the cordwood construction,
the components are not visible except for the ends of their leads poking through holes.
Point-to-point wiring connected the components with welded connections.
(The other side of the module is similar, connecting the other ends of the components.)
The shiny rectangle on the right is a relay, used to shut off power for standby operation.
The ends of large filter capacitors are visible below the relay. 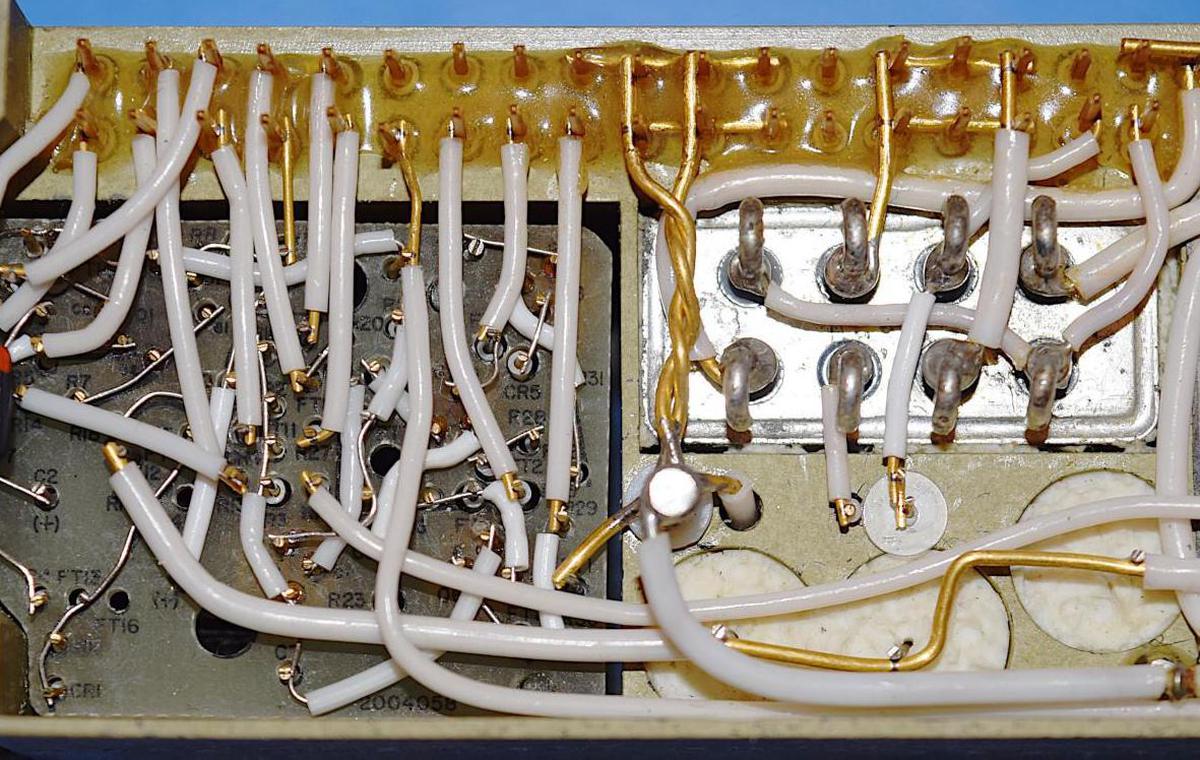 Cordwood construction in the power supply. On the left, components are mounted vertically through the module,
with welded wiring on both sides. The metallic box on the right is a relay. Underneath the relay, the ends of filter capacitors are visible.

Cordwood construction was used for high density
in applications from aerospace toCray’s CDC 6600 computer.
For flight, the AGC’s cordwood wiring was encased (potted) in epoxy, protecting it from vibration.

The AGC’s power supplies used a common switching circuit called abuck converter, which converts an input voltage
to a lower voltage.
The diagram below shows the key components: a switch (transistor), inductor, diode, and capacitor.
The key idea is that if the switch is closed for more time, more of the input voltage will appear across the load.
Thus, the output voltage is controlled by the switch timing.
The inductor stores energy and releases it when the switch is open, producing a relatively stable output. 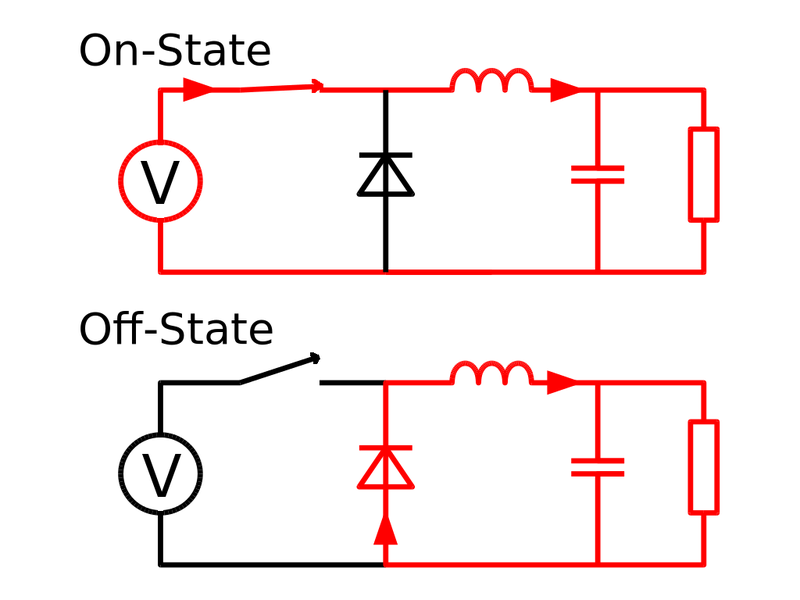 A buck converter rapidly switches between the on state and the off state.
When on, current flows from the voltage source (V) through the switch and inductor to the load (right). When the switch is open, stored energy in the inductor continues to provide current to the load, through the diode. (Source:
Cyril Buttay,
CC BY-SA 2.5).

A switching power supply requires a complex control mechanism to switch on and off at the right time.
The AGC used a technique called PWM (pulse-width modulation), where power is switched on and off at a fixed
frequency (e.g. 20 kilohertz), but changing the fraction of the time the power is on to regulate the voltage.

The schematic below
shows the AGC’s power supply.
(Don’t worry about reading the details; click for a larger version.)
The buck converter itself (outlined in the lower right)
has the expected switching transistor, diode, inductor, and capacitors.
However, the power supply has many more components to implement the PWM control circuitry.

To summarize the power supply’s operation, 28 volts (red) is supplied at the upper left and filtered.
The buck converter in the output circuit (right) reduces the voltage to 4 volts (orange)
On the control side (left), the output voltage is used for feedback.
A two-transistor comparator (lower left) compares the output voltage with a reference voltage (green) set by a Zener diode and resistor network.
The output of the comparator (purple) goes through the PWM control circuit where it modifies the width of the pulses
(brown) produced by the PWM circuit.
These pulses drive the switching transistor in the buck converter, closing the feedback loop.
The computer’s clock signal providing timing for the PWM circuit.7 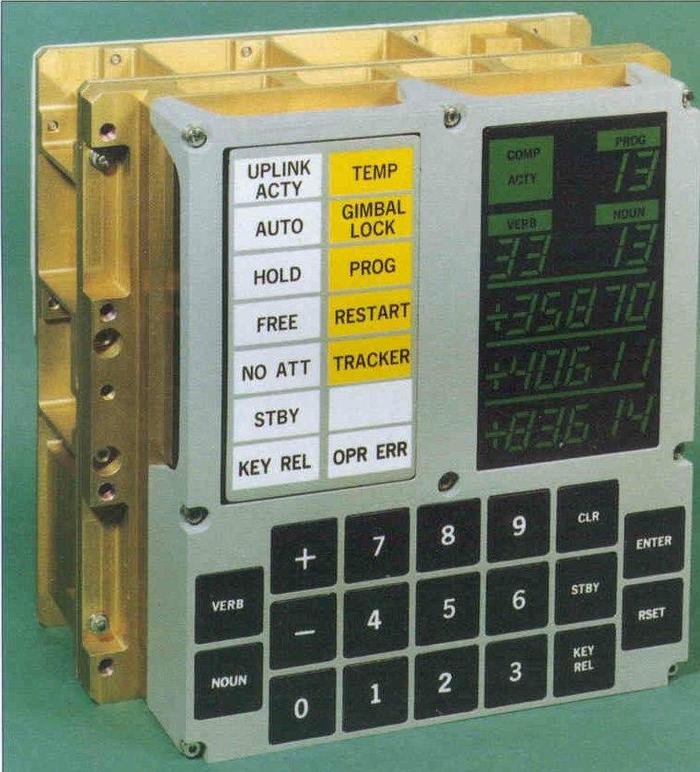 Astronauts interacted with the AGC through the Display/Keyboard (DSKY).
The STBY button (lower right) put the computer in standby mode, which was indicated via the STBY light (left).
Photo fromVirtual AGC.

The power supply also included a standby circuit. By pressing the STBY key on the display/keyboard (DSKY), a relay would disconnect most of the computer’s power.
This reduced energy consumption when the computer wasn’t needed.8

The diagram below shows the top of the power supply module with the major components labeled.
Note the large size of the transistors, inductors and filter capacitors compared to the tightly-packed
cordwood circuitry on the left. The switching transistor for the buck converter is almost aninchin diameter.

The major components of the AGC’s power supply. The components for the buck converter are much larger than the control circuitry.

The transistors of the 1960s were barely able to support switching power supplies since they required a
power transistor that could operate at both high speed and
high current, which was difficult at the time.
(Modern transistors (MOSFETs) are cheap and can handle much higher voltages, leading to ubiquitous low-cost phone and laptop chargers that
run off an AC outlet.)
The switching transistor required a high-current control signal, which was provided by three drive transistors (in a“complementary Darlington”configuration). 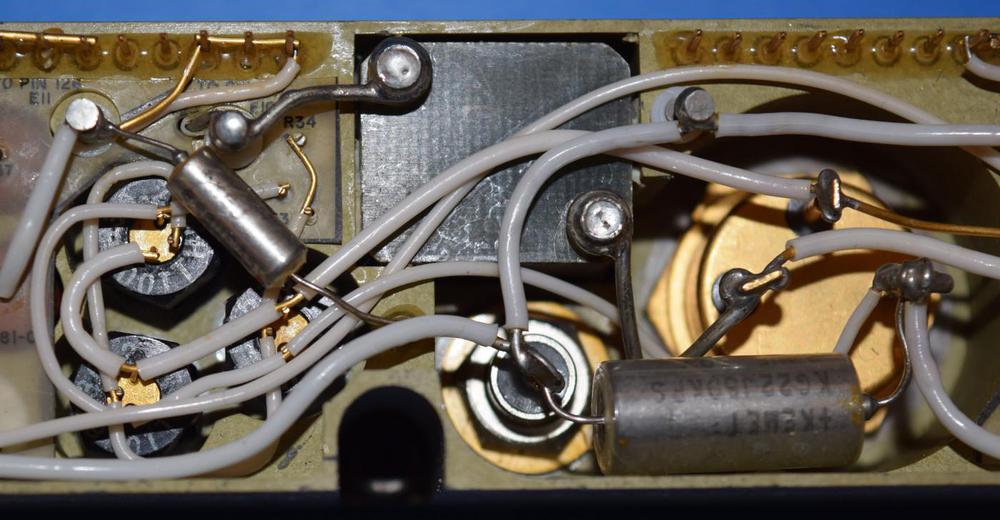 Closeup of transistors in the power supply.
The large transistor on the right is the high-current switching transistor.
Driving it required the three transistors on the left.

We extensively tested the AGC’s components before powering up the system.
For the power supply, we first checked all thetantalum capacitors
since tantalum capacitors are prone to shorting out.
We found that the capacitors were all in good shape with the proper capacitances.
This is in contrast to modern capacitors, which often leak or fail after a few years.
NASA used expensive aerospace-grade capacitors and X-rayed each one to test for faults, and this
made a large difference.

Wiring up each power supply for testing (below) was more complex than you might expect.
The AGC used two identical power supplies that supplied 4 or 14 volts.
The output voltage was selected by backplane wiring that connected different resistors in the feedback resistor network.
We reproduced these connections on a breadboard, as well as connecting up the input and output.
Some high-wattage resistors (lower right) served as the load. 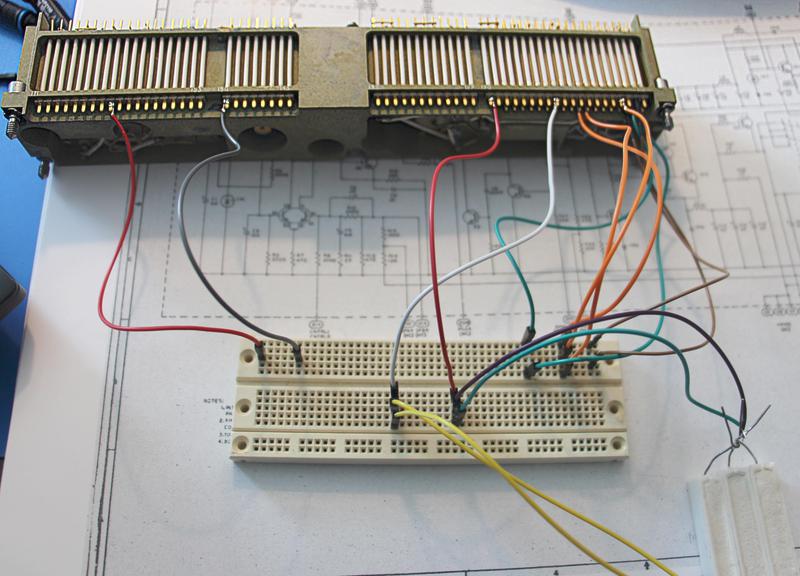 We powered-up the AGC modules with 28 volts using a current-limited supply to limit potential damage
from any faults.
We took measurements and found that 4V power supply produced 4.09 volts while the 14V power supply produced 14.02 volts.
The quality of the power was good, with about 30mV of ripple.
We were somewhat surprised that both power supplies worked flawlessly after 50 years. 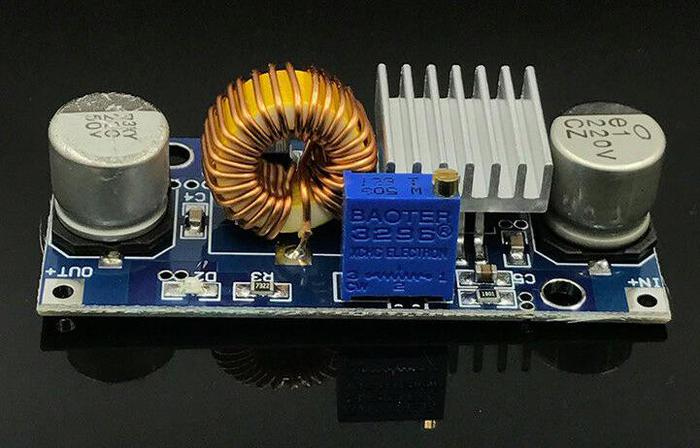 A modern 5A buck converter is compact and costs $1.50.

To learn more about our AGC restoration, see Marc’sseries of AGC videos; the video below shows us testing the power supplies.
I announce my latest blog posts on Twitter, so follow me@kenshirrifffor future articles. I also have anRSS feed.
Thanks to Mike Stewart for photos.

LibreOffice: The Next Five Years

The Far Side returns after 25 years, and it’s all digital

26 Years Later, Classic Adventure Beneath A Steel Sky Gets The Sequel It Deserves – Kotaku

Part II: After 3 Years of Work, Chrome Killed My Extension and Won’t Tell Me Why

Scientists trace a cosmic radio burst to a galaxy 3.6 billion...

ABOUT US
Techbits is your news, tech blog and article website. We provide you with the latest breaking news and videos straight from the tech industry.
Contact us: [email protected]
© Techbits.us 2019
MORE STORIES
insider

Leak from a reliable insider says PS5 is much faster than...