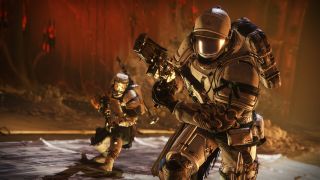 Destiny 2spent most of its first year fixing stuff that wasn’t broken. It launched with a double-primary weapon system, 4v4 PvP, and static-rolled gear – all deep-cut design choices which have since been walked back. Special weapons are back, most PvP modes are now 6v6, and if anything new additions like Black Armory Forges and the Menagerie have tripled-down on grinding for the perfect God roll. Thanks to these and other changes, Destiny is currently in the best shape it’s ever been, and forDestiny 2 Shadowkeepand beyond, it’s clear that Bungie’s looking back on the original Destiny’s successes – and its failures – for inspiration.

If I could turn back time

The more we learn about Shadowkeep, the more it reminds me of the original Destiny. At first, it just looked like a throwback to the Moon. There’s a bunch of Hive, Eris is back, there are some “Nightmares” based on previous villains and bosses, and now the Moon is twice as big. Oh, and the new raid is set in the Black Garden, an important but underused area from Destiny’s campaign. Cool, I’m here for it. Let’s bust open this time capsule and relive the glory days for a season, maybe advance some forgotten storylines while we’re at it.

But it’s more than that now. Shadowkeep is building on or straight-up adding back multiple features and items from the original Destiny, and I’m not just talking about, like, Monte Carlo, Weapons of Light, and some PvP maps. For example, we recently learned – as part of Destiny 2 game directorLuke Smith’s gargantuan Director’s Cut blog posts– that Shadowkeep will have multiple Power caps. When players hit 900 Power, they’ll start getting Prime Engrams again. When they hit 950, they’ll cap out on normal gear and the only way to push past that will be pinnacle activities like dungeons and raids, which can drop gear up to 960 Power. From there, players can level their seasonal Artifact and, in theory, reach 999 Power or potentially even higher levels.

“This is a way of reclaiming a little bit of the character Power prestige that the initial D1 Power climb created,” Smith says. “If you inspect a player and see their gear is 960, you know they’ve done a bunch of pinnacle activities.”

As Smith himself readily admits, Destiny 2’s Power system is a bit stilted and often underwhelming, which is why I think it’s so valuable to have pinnacle Power returning. For the past year, Destiny 2’s had so many weekly and daily Powerful challenges that reaching max level barely meant anything. In Shadowkeep, the number of Powerful sources is being trimmed dramatically, and more importantly, if you want to get the best stuff, you’ll have to do the hardest stuff.

There’s only a 10-Power difference between the soft cap and the pinnacle hard cap – not enough to put anyone off participating in any activities – but those 10 levels lend a sense of prestige to end-game gear which Destiny 2’s never really had, but which Destiny 1 pretty much always did. Raid gear just plain meant more in Destiny 1. It dropped at higher Power, it had better perks, it was peerlessly fashionable, and it was more enticing as a result. I’ve gotten lax about raiding in Destiny 2 in the past year, despite how enjoyable the raids themselves are, and I think that’s why. I miss that prestige. I don’t want to return to the forever-29 hellscape of grinding raid boots, but I’m thrilled to see end-game activities grow some teeth.

Shut the hell up and kick my ass

Speaking of toothless activities: Shadowkeep is also resurrecting the difficulty tiers seen in Destiny 1, andfrom what we heard at Gamescom, they’ll be available for a variety of activities. So far, we’ve seen Adept, Hero, and Legend difficulties, each with their own Power requirements, increasingly difficult modifiers, and – hopefully – better loot pools. This feels like a natural evolution of the Nightfall Strike card introduced via Xur, and it’s another returning system I want to see because, quite frankly, Destiny 2 has gotten too easy.

I felt like a Guardian in Destiny 1, but between outrageous Supers, busted Exotics, and power-creeping pinnacle weapons, I feel like a straight-up god in Destiny 2, and it turns out godhood gets boring after a while. There’s plenty of mechanical difficulty in raids and what not, but everyday firefights don’t even phase me anymore. What is there to challenge me when Recluse exists? Enemies with red health bars may as well save us all some trouble and not even show up to work. I want these difficulty tiers to change that. Please,something, kick my ass.

The other good news here is that Bungie is toning down over-the-top Supers and abilities, and Smith said greater difficulty will be a focus of Destiny 2 Year 3. Likewise, I’m holding out for new weapons and balance changes that rock the boat when it comes to DPS. Stacking grenade launchers in a Well of Radiance has had its time in the sun. Let’s give something else a try. Hopefully, the flexibility and new perks of theDestiny 2 Armor 2.0system will empower players to create new and inventive strategies that highlight the RPG side of the game.

That sentiment dovetails nicely with another returning feature: Artifacts. Back in The Taken King, Artifacts were just stat sticks with some cute passive abilities that sat at the bottom of your gear sheet, but the seasonal Artifacts coming in Shadowkeep and beyondlook like genuine game-changers. We’ve got special ammo types, mods that let you weaken enemies, mods for elemental abilities, mods for the new Finisher moves (which are exciting in their own right), and who knows what else. That’s what I’m talking about. Yes, I’m happy that I’ll have easier access to the reload, scavenger, and reserve perks I need, but I’m infinitely more interested in all the weird mods coming in Armor 2.0. My hope is that these will help make up for the lack of customizable skill trees in Destiny 2, and really help players carve out different play styles beyond “shoot the dudes in a subtly different way.”

I will say, though, I don’t want Destiny 2 to outright turn into Destiny 1, and I’m glad we got a brand-new game rather than a big expansion to the original. I’d say the same forDestiny 3. Technical and hard drive limitations aside, a lot of the features and content we have now wouldn’t have been possible within Destiny 1. It really does feel like Bungie had to mess up in order to get it right, and Destiny 2 Year 2 was absolutely worth the wait. For one, Bungie’s finally leaning into the MMO side of the game – in no small part, I suspect, because now it can say the word MMO without having Activision slap its wrist with the ruler of mass appeal.

In the same vein, there was a lot of room for improvement in Destiny 1. This bit from Smith’s second Director’s Cut post sticks out to me:

“Here’s something I miss from Destiny 1: filling bars on my items and using materials to level items,” he says. “Even though I ended up with more Ascendant and Radiant materials than I ever could’ve needed, the existence of these materials meant the hunt for powerful rolls could go on longer. I think wanting and needing materials is a good thing – as long as you know what you can do to go pursue that material. I’m glad we’re getting a little more of that back into Destiny with Shadowkeep.”

In some small way, the Masterwork system does let players upgrade their favorite gear to make it feel more personal, but I don’t think that’s quite what Smith’s describing here. And I’m totally down for a return to adjacent or auxiliary upgrade systems that reward players for really putting their favorite gear through its paces. As long as new guns feel good out of the box – that is, I’m stacking on extra bonuses or enhancing existing perks, not just unlocking the ones on the gun in the first place – I will happily grind that out. That said, please don’t make me farm Spirit Blooms again, Luke Smith. I will cry. I’ll do it, but I’ll cry. And do you really want that on your conscience? A grown-ass man sobbing into his keyboard because of some Spirit Blooms? Think about it.

I think the most important line in Smith’s Director’s Cut is this: “We made too many changes to a formula that – while it had begun to decline in Destiny 1 – wasn’t as flawed as we thought.” Smith was only referring to Trials of Osiris and Trials of the Nine here, but to me, this encapsulates both the evolution Destiny 2’s undergone and its potential for growth. Destiny 2 has so many great ideas, Armor 2.0 and seasonal Artifacts among them, but it’s also missing some of the best stuff from the original game, often because it feels like Bungie wanted to do things differently for the sake of being different. As Smith put it: “At D2 launch, we shortened the Power climb, oversimplified the game, made it too easy to get items, focused on bringing new players in, and hoped that players would pursue looks alone as their endgame (we were wrong!)”

Fortunately, today’s Destiny 2 is great. It’s better than Destiny ever was, and it can stand up on its own merits. It’s my most-played game of the past few years for a reason. But with Shadowkeep and future seasons, I’m so looking forward to seeing Bungie resurrect and reinvent elements from Destiny 1, not just because I miss them, but because I want to see how they feelin Destiny 2.

Ask HN: Who Wants to Be Fired?

bao - October 3, 2019
0
I'm the sole developer working on my current project, which is overhauling a massive DOS era application, as well as overhauling an early 2000s era CRM/business management tool, that almost all of our work happens through.Did I mention that the DOS application is a HIPAA billing application that must meet all HIPAA guidelines as well…

Amazon is slashing prices on popular holiday gifts for 12 days...

IPOs are the beginning, not the end

How Microsoft is trying to become more innovative

ABOUT US
Techbits is your news, tech blog and article website. We provide you with the latest breaking news and videos straight from the tech industry.
Contact us: [email protected]
© Techbits.us 2019
MORE STORIES
Destiny

Destiny 2’s Trials Of Osiris Is Starting To Make Me Angry...