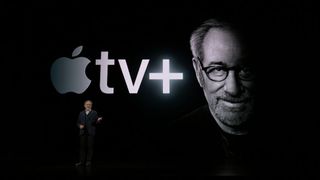 Apple is planning to release its streaming serviceApple TV Plusby November 2019, according to a report byBloomberg.

Citing “people familiar to the matter”, the report says that Apple’s also considering a subscription price of $9.99 per month (around £8.20 / AU$15), which would match the cost ofApple MusicandApple News Plus– thoughApple Arcadelooks set to undercut it with a subscription that’shalf the price.

That US pricing isslightlymore expensive thanNetflix‘s cheapest subscription, which costs $9 (£5.99 / AU$9.99) per month, though it’s significantly higher than the soon-to-be-releasedDisney Plus, which will cost $6.99 (around £6 / AU$10) per month instead.

What’s coming to Apple TV Plus?

According to Bloomberg’s sources, the roll out of Apple TV Plus is “part of a drive to reach $50 billion in service sales by 2020”, suggesting that Apple has very high hopes indeed for its fledgling streaming platform.

To do that, Apple will likely have to poach a large proportion of Netflix’s 151 million users; and by extension, Apple TV Plus shows will need to be enticing enough to lure loyal Netflix andAmazon Prime Videousers away.

The company will reportedly “introduce a small selection of shows and then expand its catalog more frequently over several months”.

Apple TV Plus looks to be a star-studded affair in general, with Apple having just released its first full trailer for news set dramaThe Morning Show, which stars Jennifer Aniston, Steve Carrel, and Reese Witherspoon.

The drama looks to be a lot darker than we imagined, examining the complicated power dynamics between men and women in a bustling morning news show, with Carell and Aniston playing co-anchors.

The trailer opens to Aniston breaking the news that her co-anchor has been fired amid a scandal; the details of the scandal aren’t revealed in the trailer, but Carell is seen screaming at his TV that Aniston has “thrown me under the bus”.

Whether series like The Morning Show, as well Steven Spielberg’s anthology stories, and a collaboration between Prince Harry and Oprah will be enough to beat Netflix remains to be seen – at least we only have to wait until November to find out.

iPhone 12 Release Could Be Delayed, A Surprising Source Says – Gizmodo

bao - November 10, 2019
0
Out of all the electronic devices I own, the one I’d want to give up last is my Kindle Oasis. In my opinion, it brings the best of technology while ignoring the worst. I even wrote a few months back about the idea around Apple creating an e-ink reader to take on the Kindle. Despite…

5G will give the iPhone 12 an advantage over Android in...

How Realistic is Mount and Blade II: Bannerlord’s Medieval Combat? –...

Why Many People Got Mysterious Valentine’s Day Texts Today

ABOUT US
Techbits is your news, tech blog and article website. We provide you with the latest breaking news and videos straight from the tech industry.
Contact us: [email protected]
© Techbits.us 2019
MORE STORIES
latest