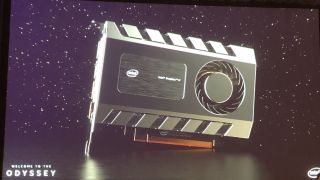 Intel has accidentally leaked some codenames and details of its incoming discrete graphics cards, and also some Rocket Lake CPUs.

This comes from a graphics driver spilled unintentionally by Intel, picked up on by an eagle-eyedAnandtechforum member.

The leak comprised of the following model names (and some clues therein) forIntel’s Xe 10nm graphics cardswhich are expected to come out in 2020:

The ‘DG’ in the codename is likely to stand for ‘discrete graphics’ (meaning a standalone GPU on a board, as opposed to an integrated graphics solution in a processor), and the ‘LP’ and ‘HP’ designations seemingly refer to low-power or high-power (and therefore more powerful) parts.

But the really interesting bit is looking at the beefier high-power trio of GPUs, the number at the end of the codename could reportedly indicate the number of execution units (EUs) carried by the graphics card.

That’s certainly our (and everyone else’s) best guess, and it would mean that these three graphics cards would utilize 128, 256 and 512 EUs respectively.

So, bear in mind that this is all speculation, but it seems that Intel’s initial Xe offerings target mid-range GPU territory, although we must also remember that we only have very small (potentially errant) pieces of information here in those numbers.

Even if this guesswork is on the money, a lot will depend on the clock speed Intel is aiming for with these products. There’s chatter about higher clock speeds being targeted, such as base clocks of around 1800MHz or 1900MHz, and that could make Intel’s Xe competitive with Nvidia’s higher-endGeForce RTXcards.

But we best not start drawing too much in the way of conclusions here, because this is all very sketchy. It’s nevertheless interesting to get a potential hint at how powerful these Xe GPUs might be, and given that they are due next year, it probably won’t be too long before we witness some benchmark leaks spilling out to give us a real indication of performance.

As mentioned at the outset, this driver leak also revealed a few nuggets of info about the integrated graphics of incoming Rocket Lake processors.

Rocket Lake is Intel’s follow-up to Comet Lake, the latter being the chip giant’s next mainstream 10th-gen processors which we shouldalso see next year, or perhaps even sooner, built on a revised 14nm+++ node, andcoming with a potential Ryzen 9 3900X beater(which could really turn things around for Intel).

At any rate, Rocket Lake is expected in 2020, and its Gen11 integrated graphics will arrive in GT0, GT0.5 and GT1 variants, with the latter two running with 16 and 32 EUs respectively. There will also be a GT1 Pro spin, too.

Why Intel Could Lose More Ground to AMD – Motley Fool

bao - June 4, 2020
0
Samsung has already confirmed its next Galaxy smartphones and looks set to shock the industry in 2021. But now a surprising new Galaxy flagship has been revealed and it’s the Samsung smartphone you should buy in 2020.  Samsung Galaxy Note 20 Plus based on multiple leaks OnLeaks / Pigtou MORE FROM FORBESBenchmarks Reveal Samsung's Powerhouse…

League of Legends error codes list: How to fix every error...

The Ferrari Portofino—Maranello made this one handle like a Miata

Leaked PlayStation Plus Games For May 2020 Are Probably Too Good...

ABOUT US
Techbits is your news, tech blog and article website. We provide you with the latest breaking news and videos straight from the tech industry.
Contact us: [email protected]
© Techbits.us 2019
MORE STORIES
hints