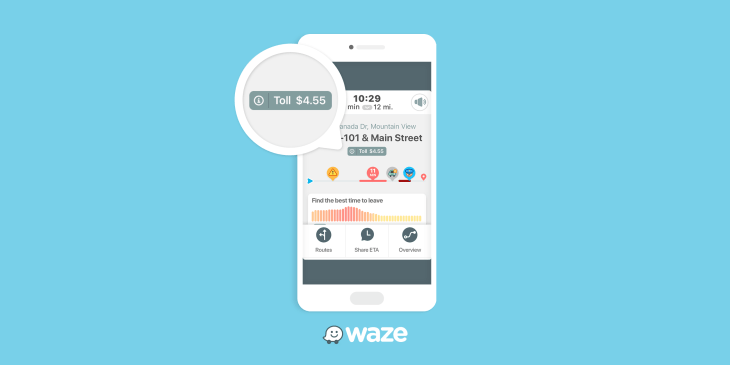 Navigation appWazeis making getting to where you’re going even easier – or at least more transparent. A new feature rolling out today will show you any tolls along your route, including the actual amount you’re going to pay, across both the U.S. and Canada.

This is above and beyond what you’ll get in most navigation apps, where you might get a visual or text indicator that there is a toll on one of the roads in your path (and you can opt to avoid them if possible) but you won’t know what you’re actually paying. With Waze, you’ll get the amount – sourced from its community of user drivers, rather than direct from the official toll road operators, however, but Waze’s crowd-sourced navigation data often has a leg up on the official source in other cases.

Waze will show you the toll prices up front, too, before the navigation actually gets under way, which is great because that’s when you actually have the opportunity to do something about it, whether it’s scrounging seat cushion change or just choosing to drive a different way.

This will be rolling out beginning today, so keep an eye out if you’re trying to get somewhere in the U.S. or Canada.

A new render shows an iPhone 12 with a 5.4-inch OLED display – Notebookcheck.net

bao - December 23, 2019
0
Toss a coin to your Witcher by Liam Croft 2 hours agoHave you been watching the Netflix series The Witcher this past weekend? What do you think of it? The adaptation of the book series may be dividing opinions critically, but we've seen nothing but positive praise from fans. It sounds like a success, and…

Ford built an electric Mustang with a manual transmission. And we’re...

The iconic Motorola razr is back like you’ve never seen it...

What If Consciousness Comes First?

Google releases 3 new experimental apps to help cut down your...

ABOUT US
Techbits is your news, tech blog and article website. We provide you with the latest breaking news and videos straight from the tech industry.
Contact us: [email protected]
© Techbits.us 2019
MORE STORIES
battery