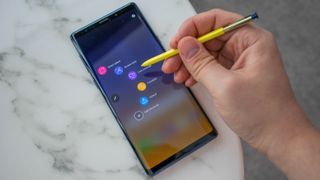 The Samsung Galaxy Note 9 is set to be replaced soon. (Image credit: TechRadar)

Samsung has name-checked theSamsung Galaxy Note 10not once, but twice, leaving us with no doubt what it will be called, and that it does exist.

First of all, we spotted the Samsung Galaxy Note 10 name during an official presentation at the firm’s Korean campus – the first time the much-rumored handset’s name has been acknowledged by Samsung.

What we saw was the ‘Galaxy Note 10’ name in an image (which we weren’t allowed to photograph) showing what we were told is a rough render of a reference device which isn’t representative of what the handset will look like when it launches (hmmm).

Then, the following day during a round-table discussion with Samsung CEO DJ Koh, the Galaxy Note 10 name was mentioned again.

In response to a question at Bixby, Koh briefly name-checked the handset at the end of his answer, saying “and for our Note 10, it will be another phase for Bixby”.

While it’s not clear whether there will be new features for Bixby launching alongside the Note 10, or whether Koh was simply confirming that Samsung’s smart assistant will continue to be a feature on its upcoming device, we may not have to wait much longer to find out.

The Samsung Galaxy Note 10 launch date is tipped for August 7, although we’re still waiting on confirmation from Samsung as to when it plans to reveal its next super-sized smartphone to the world.

During the same presentation we also saw a couple of other images of a handset with an Infinity-O display on which the camera (completely surrounded by screen) is centrally placed at the top of the display, rather than being located in the right corner, as on theGalaxy S10andS10 Plus.

When we quizzed Samsung on the handset in these images we were told that these too were merely reference devices, and not a confirmed product.

However, it does suggest that Samsung is considering this particular layout – and with the Note 10 launch potentially just round the corner, it could be a candidate for the new look.

That said, with the Note series tending to be Samsung’s most premium offering it would be a surprise if it had just a single front-facing camera, given that the S10 Plus and S10 5G both have two.

We’ll have to wait and see – but at least we can now say with complete certainty that the Samsung Galaxy Note 10 is on its way.

Forget Samsung’s Galaxy S20 Ultra And Note 10, This Is The Smartphone To Buy – Forbes

How football is returning to TV screens in Europe with everyone...

bao - May 15, 2020
0
BT Sport has created a virtual studio As governments across Europe begin to ease lockdown restrictions and allow sport to return during a pandemic, a production team in the UK has quietly been getting ready. BT Sport, which typically produces and broadcasts live Premier League football (soccer) in 4K HDR on a weekly basis, has…

Big Discounts on Xbox One Controllers, Including Elite Series 2 –...

We’re hiring for VP, Engineering at The Muse

‘What the Golf’ is coming to the Nintendo Switch on May...