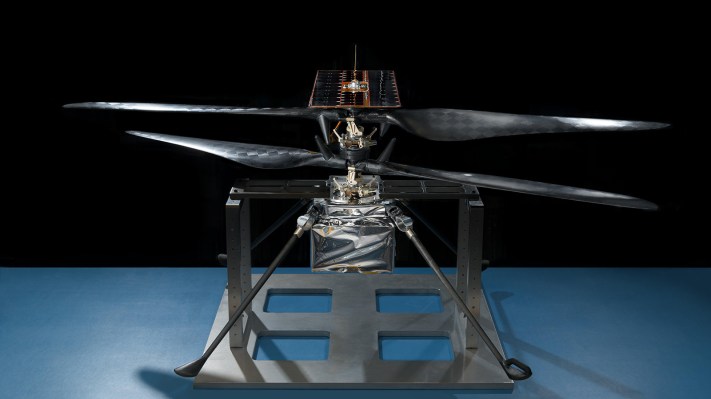 NASA’sMarsHelicopter will be a key experimental craft when it comes to shaping what humanity’s future exploring the Red Planet looks like – when it launches aboard NASA’s Mars 2020 mission, it’ll head to Mars with the aim of testing the viability of flying heavier-than-air vehicles through another world’s atmosphere. Afterpassing its most recent volley of tests, it’s now moving into the final stages of preparation ahead of the target July 2020 Mars launch.

The 4-pound, autonomous test helicopter will be carried above the Mars 2020 rover during the flight to the planet, before being deployed once the rover sets down in Mars’ Jezero Crater, on the target date of February 18, 2021, after its multi-month trip from Earth. The helicopter has a camera on board, as well as a solar panel to provide power. This version doesn’t have any other kinds of sensors or scientific instruments on board, but that’s because its entire reason for being is to determine whether or not a Mars drone is even a viable proposition. Future iterations could gain sensors to help gather data that hasn’t been possible with purely ground-based rovers.

So far, the Mars Helicopter has been tested in high-vibration environments that simulate launch and landing conditions, extreme temperatures like those found on the surface of Mars, and electrical and mechanical system integrity testing. Now, it’s had its solar panel installed and the rotors are being spun up, so there’s another round of stress and integrity testing to be done to ensure it’s ready for the real thing.

NASA’s Mars 2020 mission will span at minimum one Mars year, which lasts 687 Earth days, and includes a newly designed rover that is around the size of compact car, but features upgraded wheels and also a new core sampling drill for harvesting rock and soil samples not on the surface of the planet.

NASA’s Mars habitats could be made from a surprising material: fungi – CNET

Virgin Orbit plans to send cubesats to Mars as early as...

bao - October 9, 2019
0
Virgin Orbit is a spinoff of Richard Branson's Virgin Galactic and is dedicated to low-cost smallsat projects. This new Virgin Orbit endeavor was reportedly inspired by NASA's recent InSight mission, which successfully sent two cubesats to Mars. Now, the company believes it can send its own similar spacecraft (as light as 110 pounds) into deep…

The Ferrari Portofino—Maranello made this one handle like a Miata

This Japanese hotel room costs $1 a night. The catch? You...

Ford Ranger Raptor With V8 Engine Allegedly In The Works –...

ABOUT US
Techbits is your news, tech blog and article website. We provide you with the latest breaking news and videos straight from the tech industry.
Contact us: contact@techbits.us
© Techbits.us 2019
MORE STORIES
Helicopter